Dexter Filkins: No End In Sight In Afghanistan

Another great interview with Dexter Filkins on NPR's Fresh Air.
Posted by maxie1218 at 5:40 AM No comments:

Dexter Filkins is back from Afghanistan and was one of the guests on Charlie Rose's program Monday:

Afghanistan updates "of the month" 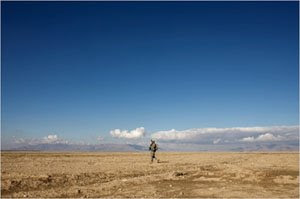 One month later, I'm back with the links to Dexter Filkins' articles, another slide-show with Danfung Dennis photos, and some other things...

Leader of Afghanistan Finds Himself Hero No More
(Published: February 7, 2009)

NBC's Richard Engel is a pretty busy Chief Foreign Correspondent. After three weeks in Israel/Egypt/Gaza, then two weeks in Iraq to cover the recent elections, he is now “back” in Afghanistan. Here is his latest report “Losing Ground to the Taliban”

Visit msnbc.com for Breaking News, World News,
and News about the Economy

And I would feel guilty and bad if I end this post without mentioning Atia Abawi. The new CNN Kabul Bureau Chief is doing very well in Afghanistan. Click on this link to see her latest reports on cnn.com.

She has been on CNN/I BackStory a few times. On this clip, she talks about her new assignment (December 15, 2008):

(photo credited to Danfung Dennis for The New York Times)
Posted by Delie at 12:10 PM No comments:

Yuri Kozyrev has won first prize in the Singles Portrait category of the World Press Photo awards. His stunning photograph can be seen on their website. Thanks to Sharon for that info!
Posted by Cyn at 1:15 PM 1 comment: