Death of a Fixer 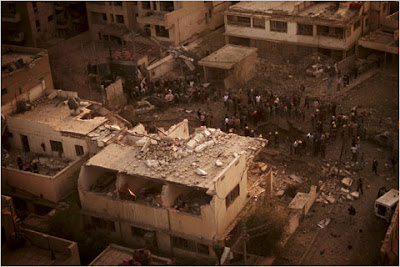 Rescue workers sifted through the rubble of buildings around the Hamra Hotel
that were devastated in a bomb attack in Baghdad on Monday.
Stephen Farrell of The New York Times has a heartbreaking article in today's "At War" blog about a friend who died in the bombing of the Hamra Hotel. Please read it, here.
Posted by Cyn at 8:04 AM 1 comment:

The gun markets of Pakistan (CNN/VICE) 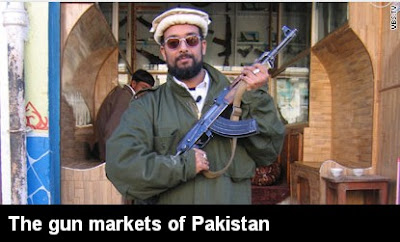 CNN.com has posted a fascinating report from an independent media company about "Darra Adamkhel, the massive open-air market located deep in the tribal areas, where a frighteningly high percentage of Islamic holy warriors goes to buy their guns." The article and video are available here.
Posted by Cyn at 7:55 AM No comments: 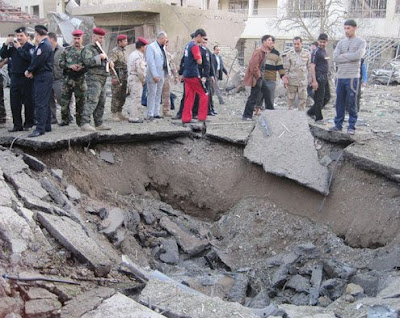 The crater outside the Hamra Hotel in Baghdad after Monday's attack. 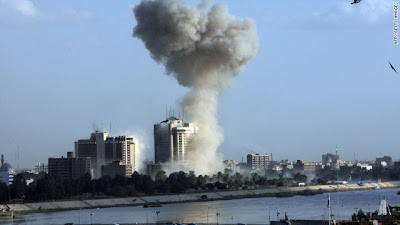 Smoke rises Monday following an explosion near Baghdad's Palestine Hotel.
A series of bombs targeted three hotels in Baghdad this morning, two of which are well-known as locations where journalists often stay.

The Palestine was the hotel that was shelled by American troops during the 2003 invasion, killing two journalists and wounding several others. The Al Hamra was where Time magazine's bureau was located when Michael Ware became bureau chief. More recently, it was home to the McClatchy and Christian Science Monitor bureaus. They left the hotel recently. John Walcott, the Washington bureau chief for McClatchy, sent out a note to his staff this morning about that move:

The recent move out of the Hamra was no accident, nor was it simply good luck. Hannah Allam, who oversees the Baghdad bureau from her base in Cairo, was in Iraq late last year overseeing the merger with the Monitor and was alarmed by the deteriorating security conditions at the hotel and some developments in the immediate neighborhood, most colorfully the openings of two brothels across the square, which in addition to their primary purpose provided an ideal place to survey the Hamra and its defenses without attracting much notice. The security force had shrunk to about half of what's needed, largely because NBC News has bailed out of Iraq and taken its budget with it, and one day workers arrived and began tearing down the blast walls, we suspect because of a dispute over payments to someone in authority.

The death toll from this morning's blasts currently stands at 36, with 71 injured; no journos have been reported to be among the dead/injured.

Read the rest of Walcott's note here.
Read McClatchy's coverage of the bombings here.
Posted by Cyn at 11:00 AM 1 comment:

National Geographic Channel has acquired exclusive global broadcast rights to a feature-length documentary about U.S. troops on the frontlines in Afghanistan, reports The Hollywood Reporter.

"Restrepo," which will premiere on the opening night of the Sundance festival, is based on Sebastian Junger's latest book, called “War,” and comes from Junger and photojournalist Tim Hetherington.

Theatrical rights have yet to be sold. The move is expected to air on Nat Geo in the fall. 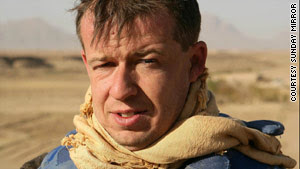 Rupert Hamer, a reporter for Britain's Daily Mirror, has been killed by an IED while embedded with US Marines in southern Afghanistan. His cameraman, Philip Coburn, was seriously wounded. A Marine and a member of the ANA were also killed, and five Marines wounded.
The full article on the incident is available here.
Hamer's blog on the Daily Mirror site is here.
Posted by Cyn at 10:59 AM 2 comments: