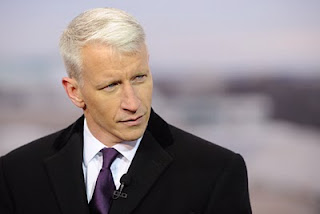 CNN’s ‘Taliban’ Exposes Lives
and Motives of Fighters
Documentary Debuts Saturday, Dec. 11 at 8:00pm ET & PT on CNN/U.S.
CNN's Taliban takes you behind enemy lines, and face-to-face with the men our troops are fighting. The Taliban are a violent enemy that have killed hundreds of American troops in Afghanistan since 2001. Despite a nearly ten-year war with the Taliban, most Americans know little about how they fight and live – until now.
In Taliban, CNN anchor Anderson Cooper debriefs Norwegian journalist Paul Refsdal about his unprecedented filming behind enemy lines in Afghanistan. No Western journalist has ever spent as much time with the Taliban, with as unrestricted access, as Refsdal.
CNN’s Taliban reveals the enemy at war – preparing weapons, planning attacks, and interacting with their families and fellow fighters. Refsdal risked his life to capture these never-before-seen images, and ended up being kidnapped. His harrowing escape is also documented in the film.
Cooper presses Refsdal about why he put his life in jeopardy to film the Taliban. Refsdal said, “The problem has been with the – the people [journalists] who meet the Taliban, they stay for one hour, and they ask the Taliban to...go around arranging some kind of training...And you have one commander with his face covered...to see the real Taliban, you have to stay for a while...”
The one-hour documentary, Taliban, debuts Saturday, Dec. 11 at 8:00p.m. ET and PT on CNN. It will air on CNN International in late December.
A multimedia report including historical timelines of the Taliban and the country of Afghanistan, video excerpts from the documentary, and an interview with journalist and Guerilla Reporter author Paul Refsdal can be found at www.cnn.com/taliban after Wednesday, Dec. 8.
Taliban was produced and filmed in Afghanistan by Paul Refsdal, produced for CNN by Jennifer Hyde and Ken Shiffman, and edited by Cliff Hackel. Bud Bultman is managing editor for this production. Scott Matthews is the director of CNN’s Special Investigations and Documentaries unit.
* * * * *
Anderson Cooper also has an Afghanistan report on 60 Minutes this week:

GOOD COP, BAD COP - The Afghan National Police force is more important to the security of the country than the army, but despite improvements, there are still drug abuse and corruption problems within its ranks. CNN's Anderson Cooper reports. Keith Sharman is the producer.

FIRST, MY RESPECT TO EVERYONE IN CNN. BUT WHO SAID THAT THIS PEOPLE THE CALLED "TALIBAN" ARE MUSLIM, OR EVEN CONSIDERED MUSLIM. THIS PEOPLE ARE THE GARBAGE THAT WANTS TO PUT REAL MUSLIMS LOOK LIKE DOGS IN EVERYONE EYES, LIKE EVERYONE LOOKS AT US, ALL BECAUSE A GROUP OF SOME IGNORANT PEOPLE THAT CALL THEM SELF MUSLIM AND USE THE HOLY "KORAN" AS A WEAPON AGAINST PEOPLE, COUNTRY'S. A REAL MUSLIM HAS NO HEART TO KILL SOMEONE, A REAL MUSLIM DOES NOT THREAT TO DO SOMETHING ON THE NAME OF ISLAM OR THE NAME OF ALLAH. ISLAM, ALLAH AND THE KORAN DONT TELL ANYONE TO DO WHAT "TALIBAN" DOES. ISLAM IS A RELIGION OF UNION, ACCEPTANCE OF PEOPLE FOR WHAT THEY BELIVE, THE KORAN AND ISLAM DONT TELL ANYONE TO GO KILL, ISLAM DOES NOT TELL ANYONE TO USE BOMBS AGAINST INNOCENT PEOPLE, ISLAM DONT TELL ANYONE TO AMBUSH, ISLAM DOES NOT TELL ANYONE TO GO BLOW UP THEM SELF BETWEEN SOLDIERS, INNOCENT KIDS, INNOCENT WOMEN OR MEN. ISLAM MEANS PEACE, PURITY, SUBMISSION AND OBEDIENCE TO GOD (ALLAH). BUT ALLAH DOES NOT SAY TO HARM, KILL, RUIN. SORRY MR. COOPER AND MR. REFSDAL BUT I DONT THINK ITS RIGHT TO SHOW THIS ANIMALS AND CALL THEM MUSLIM BECAUSE FOR US MUSLIM TALIBAN ARE DOGS, IGNORANT, LOW LIFE. USE THE KORAN AS A REAL MUSLIM, TO PREACH THE REAL MEANING OF THIS HOLY BOOK, TO PREACH THE REAL MEANING OF ISLAM. I EAT, RESIDE, WORK AND WAS BORN IN THIS COUNTRY, SAME AS MY PARENTS THAT ARE FROM LEBANON, BUT I LOVE AMERICA, BUT STILL DO NOT ACCEPT PEOPLE TO CALL THEM SELF MUSLIM WHEN THEY ARE CONSIDERED A DISGRACE FOR US REAL MUSLIM. PRACTICE YOURE RELIGION LIKE OTHERS THE RIGHT WAY NOT THE WAY TALIBAN DOES (THEY DONT PRACTICE ANYWAY), THEY USE ISLAM AS AN EXCUSE FOR THEYRE DIRTY JOBS. TALIBAN MAKES ISLAM DIRTY, FILTY. TALIBAN DID NOT BRING ANYTHING BUT SHAME TO ISLAM. TALIBAN ARE NOT MUSLIM, THEY DONT HAVE A GOD, A HOLY BOOK, A PROPHET, OR MORE IMPORTANT THEY ARE PEOPLE WITH NO PRINCIPALS, ISLAM DOESNT TELL YOU SIT AND FIGHT, ISLAM TELLS YOU WORK, PREACH, PRAY BUT DOES NOT TELL YOU KILL. THATS WHY THIS WORLD IS THE WAY IT IS, BECAUSE OF PEOPLE LIKE TALIBAN, YOU TALIBAN MAKE THE NAME OF ISLAM DIRTY, LEARN HOW TO READ AND THEN READ THE KORAN. NO WHERE IN THE WHOLE KORAN THE KORAN SAYS "USE ME AS A WEAPON", THE KORAN DOES NOT SAY ALLAH SAID DECLARE WAR TO OTHERS. READ, READ, READ, LEARN, LEARN, LEARN. BUNCH OF IGNORANT ANIMALS......

Hussein, your point is well taken. Sadly, the Taliban (and al Qaeda and a whole lot of other fanatics) call themselves Muslim and use the faith as an excuse to kill and destroy. It is a shame and a crime against the true faithful. And then followers of Islam such as yourself who understand the real meaning of the Koran are too often painted with the same brush, which is unfair of us.

True Muslims such as yourself need to keep speaking out, and non-Muslims need to educate themselves about the true meaning of the Prophet's teachings. We must fight the ignorance, the intolerance, and the hate, or we are all doomed to watch our brothers and sisters die in violence for decades to come.

Thank you for your comments, Hussein. (And if I may offer a small bit of advice: when writing on the internet, using all capitals is the equivalent of SHOUTING AT SOMEONE. As much as your anger is understandable, it makes it hard for anyone to read and understand your very important message.)